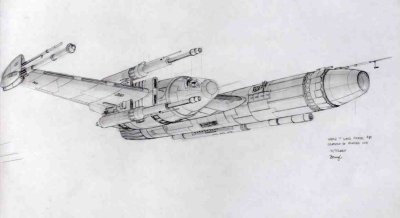 * - The F Wing uses the same gyroscopically stabilized command pod system as the B Wing fighter, which is also vulnerable to the same problems should it malfunction. In game terms when the fighter is heavily damaged, a roll of 1-2 (used to determine which system is damaged) means the stabilization system has failed. Reduce all fire control codes by 1D (since the craft is no longer a stable firing platform Sublight speed drops from 6 to 2 (atmospheric speed goes from 330;950 kmh to 225;650kmh). These penalties are cumulative.


** - This Capital ship scale turbolaser consumes far too much power for the StarFighter to supply so is charged from capacitors, this means that unless the capacitors are recharged from a Capital Scale vessel, the TurboLaser can only be fired twice in any 24 hour period.


Description: The F Wing is a direct replacement for the B Wing fighter which performed so well during the Battle of Endor and during the years of the formation of the New Republic. The F Wing is designed with the same role as the B Wing, that of a Fighter Bomber and Capital ship interdiction fighter. It performs these duties with in almost exactly the same way as the B Wing, but has the added edge of its capital scale turbolaser which actually allow it to stand a chance of taking on capital ships.

Page designed in Notepad, logo`s done on Personal Paint on the Amiga.
Text completely by FreddyB. Image is from TheForce.net Copyright resides with the artist.
Any complaints, writs for copyright abuse, etc should be addressed to the Webmaster FreddyB.