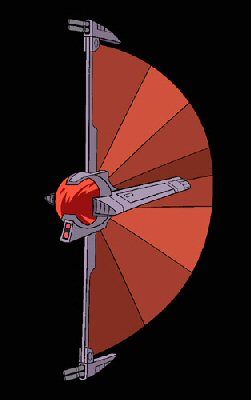 *: The FanBlade's shields can only be raised when the fighter is in combat mode with its wings extended, when activated they increase the fighters energy signature by such a degree that it is two levels easier to detect a FanBlade in this mode. However the fighter has stealthed engines which allow it to fly stealthily when the shields are deactivated, increasing the difficulty to detect the fighter by one level.


Description: Count Dooku was a known connoisseur of abstract and exotic alien designs, in both art and technology. His preferred vessel, the Punworcca 116-class solar sailer, is a striking example of this appreciation. Impressed by its performance, Dooku commissioned the Huppla Pasa Tisc Shipwrights Collective on Geonosis to craft a sextet of starfighters for his exclusive use. Since Dooku preferred to leave the flying to pilot droids, it is uncertain what he had in mind at the time he placed the order.

Based loosely on aggressive Geonosian air patrol skimmers, the resulting Ginivex-class starfighters were informally dubbed "fanblades" for their most distinctive feature. The slim, elegant vessel had an iridescent fan-like wing extending from its dorsal and ventral surface. The wing can accordion inward to hide flush with the ship's body.

The fan deploys for combat mode, stretched to its half-circle extent along a pair of articulated boom arms. Atop each arm is a double laser cannon that swings and locks into forward-firing position. In combat mode, these laser cannons have an enlarged firing arc. When the boom arms are shut, these cannons still point forward due to a limited hinge joint that locks them into place.

Though the combat mode greatly increases the fighter's target silhouette, the exotic material of the fan serves as a transmission plane for deflector shield energy. With shields fully energized, the fanblade is a tough target to damage. However, the energy output makes the fighter stand out like a beacon on sensors.

In a manner similar to the sail found on Dooku's solar sailer, the fan also serves as an alternate form of propulsion, though the ship is fitted with standard sublight and hyperspace drives.

When not in combat mode, the starfighter loses the benefit of enhanced shields, but is difficult to target due to its tiny silhouette. Also, ion bafflers incorporated into its sublight engines make it very stealthy.

At the head of the ship is the bulbous cockpit, designed specifically for humanoid occupants. When Asajj Ventress became a desciple of Count Dooku, he had the small group of fighters moved to her headquarters on Rattatak.

Through the course of the Clone Wars, Asajj would have two fighters stolen from her, one by Anakin Skywalker and the other by Obi-Wan Kenobi. The status of the remaining four is currently unknown.


Page designed in Notepad, logo`s done on Personal Paint on the Amiga.
Stats by FreddyB, descriptive text from StarWars.com. Image is by LucasArts, copyright resides with them.
Any complaints, writs for copyright abuse, etc should be addressed to the Webmaster FreddyB.