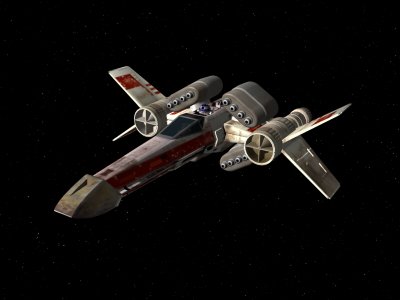 Description: Although missiles and torpedoes have traditionally carried a far higher punch than energy weapons, this always came at a high cost, due to limited and depleting ammunition supplies and shorter ranges. This has meant that Starfighters always had to carry both energy and missile weapons in an attempt to combine the high power attacks of the missiles with the versatality of the energy weapons, however this was always a dissapointing choice especially for the Rebel Alliance who could barely afford the cost of each missile fired. The Fire Breather was an adaptation of the X-Wing fighter designed around the idea of firelinking 16 light and cheap laser cannons, to allow the range and inexhaustable firepower of the lasers with the punch of a missile. In this aim the Fire Breather was successful, creating a vessel capable of hammering enemy vessels with its banks of laser cannons, however the increased cost of the design required by the extra power generators and the slightly reduced speed led to the Rebellion not taking up production of the design. The designs were however stolen and the Fire Breather has become popular through the Black Market, with it being selected as a direct replacement for the Z-95 by a number of pirate and criminal organisations.