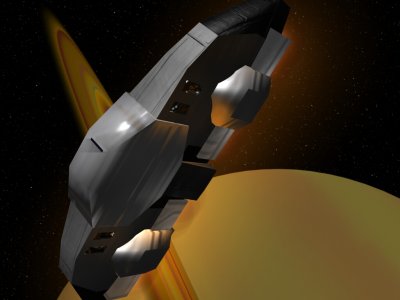 * : The Engines of the Fire-Runner can run at Space Speed 11 for 8 rounds, allowing the vessel to hopefully get out of the range of enemy vessels, however if they are run at this higher setting for more than 8 rounds the engines will burn out leaving the vessel only able to move on its manuevering thrusters at space speed 1, these thrusters are not capable of landing or launching the vessel from a planetary surface. The vessels engines normally provide a space speed of 7.


Description: As smugglers, pirates and rebels used their starships for avoiding Imperial blockades and patrols, demands for fast vessels capable of outrunning Star Destroyers and Interdictor Cruisers increased. Although the Corellian Corvette was a popular choice for this kind of operation, VenteX Construction Yards came up with this design for the same role, capable of high speeds for a short time, these vessels were designed specifically to race through blockades, and to outdistance gravity wells to keep the vessels passengers and cargo out of Imperial hands. Although not heavily armed, the addition of concussion missiles, allows the vessel to hit very hard at anyone in its way, and the high speed of the engines even when not on their boost setting means that the Fire-Runner matches speed with even modified Corvettes. Although never as popular as the competition, the Fire-Runner managed to attract a few high profile purchases, and managed to attract the attention and disapproval of the Imperial authorities which managed to attract even more sales.