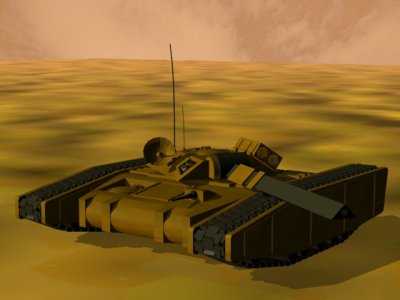 Description: With the fighting continuing between the Empire and the New Republic, Galactech saw a gap in the market for arming planetary forces with military gear to help defend against invasion from one side or the other. The Fury Assault Tank is a walker scale vehicle capable of standing up to AT-AT walkers and their New Republic counterparts, with a powerful rail gun and long ranged missiles the Fury is a tank to be reckoned with. The vehicle however uses old and cheap technology whereever possible, making it an affordable if less than spectacularly performing addition to the battlefield. Slow and weakly armoured, the Fury has become common in the militia forces of planets in the mid-rim systems, where funding prohibits the purchasing of newer and more high tech tanks and walkers.