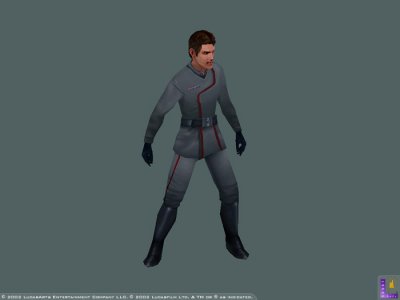 EQUIPMENT
Blaster Pistol 4D, Personal Force Shield Generator +2D Strength to Resist Damage, anything else an Imperial Admiral would like.

During the height of the Galactic Empire, Admiral Galak Fyyar was a trusted weapon scientist who reported directly to the Emperor. Fyyar left his laboratory in the Maw Installation just before the end of the Galactic Civil War to work in secret at various locations across the galaxy. Later he was given command of the Cairn Installation, and Fyyar thought that he was invincible in his power. With the death of the Emperor and the imminent destruction of the Empire, Fyyar has proved his worth to the Remnant forces by developing new technological improvements in both weaponry and armor.

Although an all roudn weapons development scientist for the Empire, Fyyar's speciality is force shields, something he designed for the Death Stars. Some Imperial Generals blamed him for the weakness that allowed the Rebel Starfighters to fly through the force shields around the first Death Star, however this was a standard weakness of all Capital Ship Shields, and something that Fyyar had designed his way around by the time of the Death Star 2's construction. Fyyar designed a small personal shield for himself, but his pride and joy was his personal set of powered battle armour with its near inpenetrable shields.

Fyyar aided the Dark Jedi Desaan in his creation of his Reborn forces, building starships and designing the technology which allowed the creation of these force using warriors believing that Desaan who put him onto the throne as a new Emperor, where in reality Desaan planned that role for himself. However it was Kyle Katarn who destroyed Fyyar's flagship the Doomgiver, and killed Fyyar in personal combat.


Page designed in Notepad, logo`s done on Personal Paint on the Amiga.
Descriptive Text by LucasArts and FreddyB, Stats by FreddyB. Image is from Jedi Knight 2 by LucasArts, and remains copyright of LucasArts.
Any complaints, writs for copyright abuse, etc should be addressed to the Webmaster FreddyB.