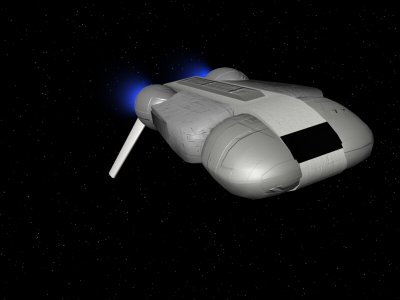 Description: The Ghtroc Assault Shuttle was one of the last releases from Ghtroc Industries, and is a near copy of the Lambda Imperial Shuttle. A small and fairly agile transport vessel, capable of carry troops and cargo speedily between systems or planets, these shuttles proved fairly popular, but not enough to save the company from its mounting debts. The Assault Shuttle is unarmed, and therefore proved itself less than popular with military forces, although it ended up in service with the Rebellion in small numbers, but due to desperation on the Rebels part rather than any particular features of the vessel itself. The Shuttle is popular with the civilian market however, acting as a personel shuttle and light cargo vessel. These are common ships, and a number have been modified into fully fledged frieghters, and serve carrry cargo along the tradelanes of the galaxy.