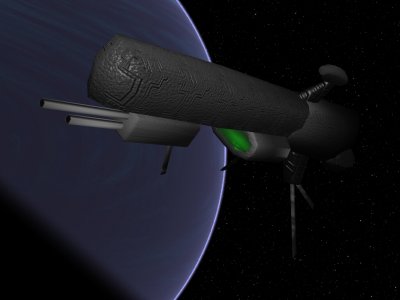 Description: The Giant Slayer class vessel was designed for one purpose, to kill capital ships, with turbolasers for defence, its massive twin mass driver was one of the first weapons capable of planetary bombardment, hurling massive projectiles at hypersonic speeds towards their target. The Giant Slayer was first brought into service during the early days of the Old Republic, and was used against such opponents as Xim the Despot, but such is its power and ability that it still makes a powerful and useful weapon today. Although its hull is comparitively weak, and it is slow and unmanueverable, the range and power of its main gun means that it can strike down modern capital ships from well outside their weapon range, causing catastrophic damage to vessels as large as Super Star Destroyers. This however has obviously made them a target for enemy attack, and very few survive early skimishes in any battle, as opponents hunt and kill these powerful vessels.