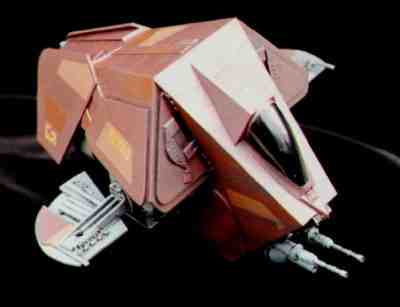 Description: The Golem class orbital shuttle is a small transport vessel designed to carry cargo between starships and planets, or between starships, doing much the same job as the Sentinel or Lambda class shuttles. As a civilian vessel it carries lighter armament than the Imperial shuttles, but is a fairly similar design, capable of defending itself should the need arise. Because of its large passenger capacity, it often finds itself being used as a troop transport by mercenary forces, and the Rebellion owned and used a number of these shuttles for strike teams. TriLex has built a large number of these vessels, which continue to sell well, although these sell better in Republic space because of Imperial restrictions on ships weapons. The crew of the Golem sit in an over, under arrangement, much like a military gunship, with the gunner sitting direct over the weapons, and the pilot above the gunner with an unparalleled view out of the cockpit.