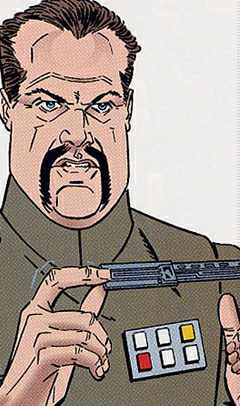 Captain-Supervisor Grammel was the Imperial official in charge of the energy mining operation on Circarpous V. He ruled with an iron fist, and enforced strict laws in the mining towns. He was a sadistic authoritarian, who would often torture prisoners for sick pleasure.

Grammel managed to capture Luke Skywalker and Princess Leia Organa during their stay on that world, but the two Rebels escaped in a daring prison break. Grammel was wounded in the escape, but underwent hasty reconstructive surgery to continue his pursuit. When Grammel failed to recapture the fugitives for Darth Vader, the Dark Lord executed him with his lightsaber.


Page designed in Notepad, logo`s done on Personal Paint on the Amiga.
Stats by FreddyB. Descriptive Text and Image is from StarWars.com, and remains copyright of LucasFilm.
Any complaints, writs for copyright abuse, etc should be addressed to the Webmaster FreddyB.