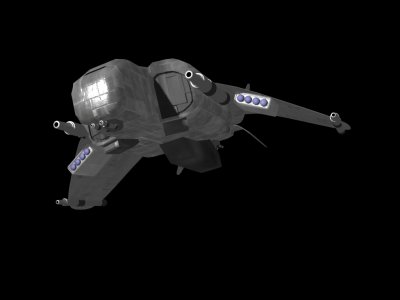 Description: The Griven Air Support Speeder is a dual role vehicle, similar to the LAAT/i Air Speeder once used by the Old Republic. It acts as a transport vessel, dropping troops and supplies into the heart of combat, as well as using its own weapons in an air support role. Capable of fighting both infantry opponents, and vehicles such as walkers and other speeders, this vehicle is rugged with a variety of different weapons and energy shielding to protect itself and its occupants. Capable of dropping from a low orbiting vessel, the speeder is faster than some starfighters once within the atmosphere, and can carry up to 15 armoured Griven soldiers or Droids. The cockpit houses the crew, who operate all weapons remotely, allowing co-ordination between the weapons and pilot, allowing the vessel to be protected from most attackers with great skill and power.


Page designed in Notepad, logo`s done on Personal Paint on the Amiga.
Text completely by FreddyB. Image is by "Bob the Dinosaur", copyright resides with them.
Any complaints, writs for copyright abuse, etc should be addressed to the Webmaster FreddyB.