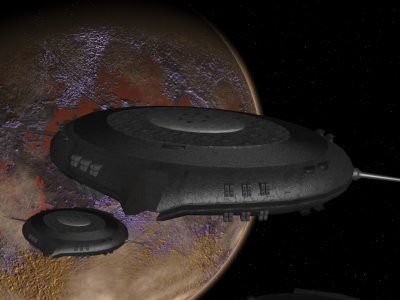 Description: The Griven Stellar Class Destroyer is the main capital ship of the Griven Empire, and although smaller lengthwise than the main Imperial and Republic capital ships, the Stellar Class takes advantage of its circular design to pack in almost as much internal volume as a Star Destroyer. This space is mainly consumed by the armour plating and weapons which make this vessel so fearsome in combat, making use of long ranged Concussion Missiles to engage and destroy enemy vessels, and quad TurboLaser batteries to defend against closer opponents. These vessels are devastating due to their tough armour and massive numbers of missile launchers, however their dependancy on expendable weapons makes them incapable of sustained combat away from resupply bases making the Griven tactics mainly those of rapid strikes and retreats as their vessels fall back for resupply. Stellar Class Destroyers are powerful combat vessels, matching Star Destroyers for pure combat power, but these vessels are slightly more primitive than Imperial vessels, making them weaker in a number of areas although this may not be visable to an observer since the design effectively compensates for these weaknesses.