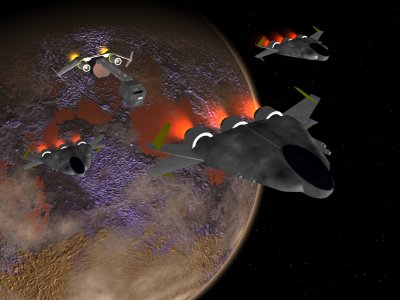 Description: The GXL-80 is the standard fighter in the Griven Empire fleet, a tough and well armed little fighter, which while not as powerful as many of the Republic and Empires fighters manages to match them by its sheer damage resistance. The Bobcat name is a rough translation of the Griven name for the fighter, which is named for a small catlike animal on the Griven homeworld know for its ferocity and hardiness in the mountains of that volcanic world. While the fighter itself is not as fast and agile as the predator it is named after, it lives up to the animals other features well, capable of taking a pounding that would easily destroy an X or Y-Wing fighter and still be able to perform excellently in combat. The Griven pilots are well aware of their fighters weaknesses against the more advanced fighters of the galactic powers, and use their vessels toughness to close to point blank range and pound enemy fighters to vapor with their laser cannons and missiles. These fighters are used not only for space patrols but also against air speeders, where the fighters lack of manueverablity really shows, however given the lack of other air support for Griven forces and the need to protect not only ground forces, but also Griven Dropships, these fighters are forced to perform in roles they are poor at.