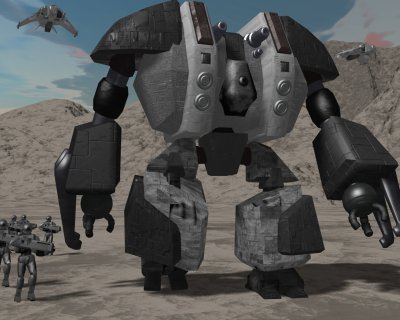 Description: One of the latest designs by the Griven Empire, the Shaker Heavy Assault Droid is a massive armoured droid designed to take on walkers at range with its heavy laser cannons, and close up with its battering rams which are attached to its arms. The droid can also deal with faster moving speeders and infantry with its light laser cannons, although it ideally is accompanied by other Griven Droids for this purpose. The Shaker is too large to be transported by Griven Air Support Speeders, and is delivered directly to the battlefield by "DragonFire" Dropships, usually operating as part of its own special operations group against enemy walkers and installations rarely being deployed against civilian centres and targets. The Shaker is still rare among Griven forces, but is being produced as quickly as possible to meet the growing demand for this powerful and deadly combat droid.