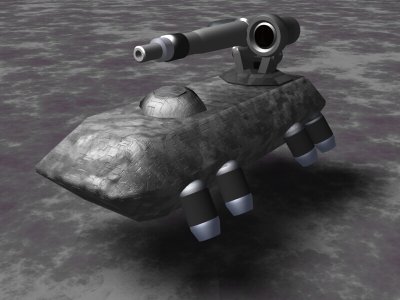 Description: The Griven Tank Droid is a repulsorlift vehicle operated by a droid brain, the fast and well armoured body is topped by a powerful laser cannon and visual sensor scanner mounted onto a turret allowing the droid a 360 degree arc of fire. The Droid is a powerful weapon, capable of causing major damage to enemy emplacements, or securing areas in patrols using its visual sensors. These droids are basic technology however and their level of intelligence is basic to say the least, they are easily fooled and have extremely poor tactical judgement, making them only really useful in direct assualts. The Griven make use of these vehicles in large numbers, making up for their poor levels of intelligence with an organic commander, however this being is vulnerable to attack if an enemy wishes to take advantage of the droids poor programming and intelligence.