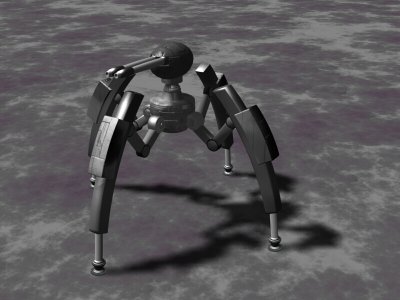 Description: The Griven Walker Droid is a light walker designed with artificial intelligence matrices capable of combating speeders and other light walkers, and devastating infantry platoons with its heavy weaponry. These walkers are used in conjunction with heavier Griven tanks and repulsorlift droids, as well as Griven infantry and human sized droids. They are fast, heavily armed and fairly well armoured swarming over enemy emplacements like a swarm of arachnids, controlled from griven command ships these droids lack any personality like all Griven droids, and have poor tactical judgement without proper command and control. These are among the first Griven troops dropped onto a battlefield, and do a good job in combat, but due to their poor logic matrices they are not efficient at security or patrols except where such patrols require elimination of all beings encountered. Griven Walker Droids are well built although not extremely advanced in comparison to the galactic standard, but due to their large numbers and robust construction they match up well against other combat droids.