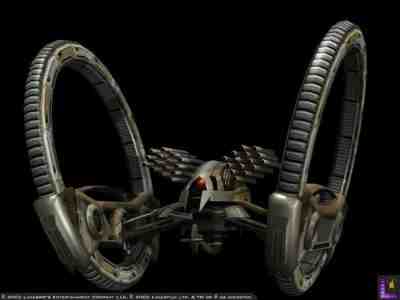 Description: The Hailfire Droid is a cross between a battle droid and a light tank designed and used by the InterGalactic Banking Clan, and later the Confederacy of Independent Systems when the Banking Clan joined them at the beginning of the Clone Wars. Hailfire Droids are built to deliver Surface to Air, and Surface to Surface attacks with their banks of 30 missiles, their mobility is provided by 30 enlarged hoop wheels which are driven by a series of magpulse drives along their circumference. The Droids main hull is a small body suspended between the two wheels, equipped with a single photoreceptor and containing the droids logic matrices. Since the Banking Clans were defeated during the Clone Wars the demand on the black market for Hailfires has remained high, but due to weapons restrictions and the massive destruction wrecked on the Confederation forces by the Republic during the Clone Wars there have been very few available. Most commonly the Logic Matrices have long since been removed, and a small cockpit mounted in the body instead, allowing a single pilot to ride and control the vehicle through jury rigged controls.


Page designed in Notepad, logo`s done on Personal Paint on the Amiga.
Text completely by FreddyB. Image is by LucasArts and copyright resides with them.
Any complaints, writs for copyright abuse, etc should be addressed to the Webmaster FreddyB.