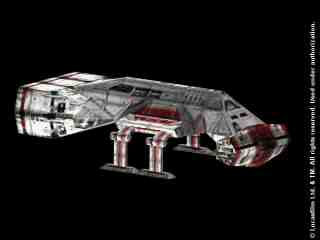 Description: The Heavy Lifter was originally concieved as a cargo vessel, with a small internal cargo hold, but the capability of carrying larger cargo pods externally. With the capability of landing on a planetary surface the Heavy Lifter can drop a cargo pod off, and lift back into space without tieing up the starship until the cargo can be unloaded, this was seen as a bonus in busy starports. However in practicality, the cost of the cargo pods, combined with the fact that the pod was still tieing up a starport until another lifter could move it, with starport facilities being more in demand than starships, led to the ship not selling particularly well. However the Heavy Lifter capabilities for transporting cargo has led to its massive success in other areas, such as salvage where the Lifter can dock with other ships and easily carry them through hyperspace with it. The Rebellion used Heavy Lifters to transfer vehicles onto the battle field, dropping them off using its powerful tractor beams and allowing Rebel forces the same flexibility as dropships allowed the Empire.