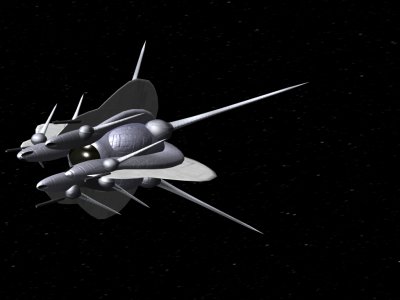 Description: The HellFighter owes a lot of its design to the Tie Series of fighters, being small, fast and lacking a hyperdrive. The powerful weapons, and addition of shields make this vessel better than the majority of Tie designs, although it does not rival some of the newer more powerful Ties such as the Avenger or Defender. Although the vessel was never adopted by the New Republic, it was shortly tested and heartily approved of by the Republics best pilots, but problems adapting to the fighters radically different controls meant that the vessel was never purchased in large numbers. The spines covering the ships hull provide some atmospheric control, but mainly act as stabilization when the vessel is landed.