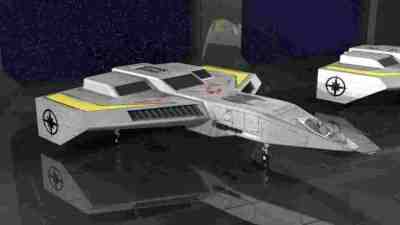 Description: An older Mandalorian Design dating back a century, the Hellhound was a heavy fighter filling a role similar to that of the Y-Wing or B-Wing fighters. The Hellhound was one of the first fighters to be equipped with a hyperdrive, and although large and unweildy the amount of damage that the Hellhound could take and still keep fighting made it a remarkable vessel for its time. Also the large engines which occupied 75% of the ships hull, actually gave this ship a high top speed, which still makes this a fast assault vessel even now. Although now phased out of service, the Hellhound is still kept in a number of planetary reserve storage facilities, and during their long war with the Sith it may become necessary for these reliable and tough fighters to see service once more.


Page designed in Notepad, logo`s done on Personal Paint on the Amiga.
Text completely by FreddyB. Image is from Wing Commander 3 copyright resides with Origin Systems.
Any complaints, writs for copyright abuse, etc should be addressed to the Webmaster FreddyB.