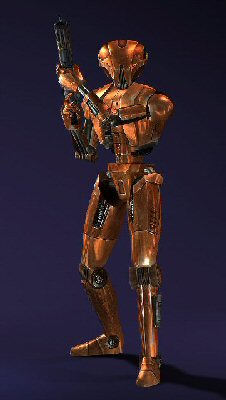 DAMAGE:
HK has a tendency to get into dangerous situations, often on his initiative.
He has repeatedly damaged over the years.
A good rule of thumb is to remove 2d6 of pips of his skills, spread randomly.
Each pip can be fixed, one at a time, with Difficult Repair roll.

Description: HK-47 is the hand-constructed and designed personal communication droid of Darth Revan, and one of the most accomplished killers in the galaxy. The Hunter-Killer was designed for communication, particularly the Sand People of Tatooine, to help Revan find the Star Map that would lead him to the Star Forge. Revan later used HK-47 for assassination, removing the most unstable elements from the galaxy.

Typically mistakenly for a standard (if intimidating) protocol droid, the assumption is tested as HK-47 engages sadistic, aristocratic mannerisms and tone to his vocabulator. Once owned he constantly begs and badgers for permission to engage in battle and to be permitted to kill. He has a eager, dark mentality with an unquenchable thirst for blood and a ravenous greed to harm and injure. It is unknown exactly how he came to his exceptional level of self-awareness, ability, and sadism, but it cannot be unconnected to his construction by, and time serving, one of the greatest Sith Lords of all time. Its as if he contains much of Revan's lust for combat.

His demeanour is aptly demonstrated in his characteristic use of the term "meatbag" when speaking of organic life-forms, especially humans. This insult was originally used in passing by HK when insulting Revan's apprentice, Darth Malak, much to Revan's amusement and Malak's annoyance. He prefixes conversation with a literal-descriptive adjective-noun combination, for example... "Veiled Threat: If you do that I cannot be held accountable for your subsequent medical condition", "Blatant Intimidation: Because unlike you I have a plasma projector and superior powered armour plating", "Contrite retraction: Oh Master, I didn't mean to imply YOU were a worthless meatbag.", "Unnecessary Statement: That would seem to be the case, Master." and suchlike. He NEVER fails to address his current owner as "Master" for whom he exclusively reserves his masochistic tendencies ("Excited Anticipation: Oh yes, Master, torture me if you have to. Or if you don't have to. Please do not hold back from violence on MY account.")

HK was on a mission deep in Mandalorian space when the Republic struck at Revan. Perhaps the fate of HK's success is dependent on Revan, when Revan fell to Bastlilla and the Jedi strike team HK failed his assassination mission. He was captured, reprogrammed, and used for numerous assassination for several new masters. But HK is a true artifact of the Dark Side and HK is a lethal jinx. From the time of his leaving Revan's ownership until being reunited at Yuka Laka's Droid Shop on Tatooine, HK was responsible, directly or indirectly, for the deaths of all-but-one of his previous masters (the only one to not be killed by him was Mandalore - and he was killed by Revan himself). HK-47's existence resembles how the sheer of the Dark Energies of Star Forge brought destruction - seemingly indirectly and coincidentally - upon those who built it. It is difficult to know which is more dangerous to a meatbag's health, being the target of HK-47 or being the owner of it.

After the departure of Revan from known space HK-47 came into the ownership of the 'Last' Jedi known as The Exile, his location thereafter is unknown.


Page designed in Notepad, logo`s done on Personal Paint on the Amiga.
Stats/Description by Stonedwolf. Image is from Knights of the Old Republic, copyright resides with BioWare/LucasArts.
Any complaints, writs for copyright abuse, etc should be addressed to the Webmaster FreddyB.