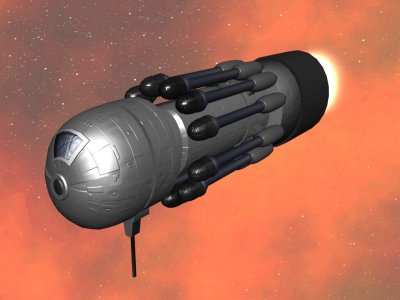 Description: The Immolator Class Frigate was designed with one purpose in mind, to destroy capital ships, it achieves this by using its 10 70 meter long ramming projectiles. These are independantly targetted missiles with crystal metal tips, which can be fired at enemy vessels smashing through their hulls and rendering the vessels unusable. While these projectiles will open a ship to space, and often lead to its destruction, the lack of an explosive tip means that many of its targets are left in good condition allowing the Empire to salvage the vessels for parts or use. The Projectiles are designed to be reusable, with the Immolator capable of recovering used missiles and refueling them for further use. However due to the extreme stress these projectiles are put under colliding with starships travelling at high velocities they are often damaged beyond use, but as supplies grew short for the Empire after the Battle of Endor, even these missiles were pressed into service. With their lack of other weapons or fighter support, Immolator Frigates were supposed to be used in conjunction with other Imperial vessels in a fleet support role, however they were often forced to operate outside of this role, leading to their destruction and abandonment of the design by the Empire.