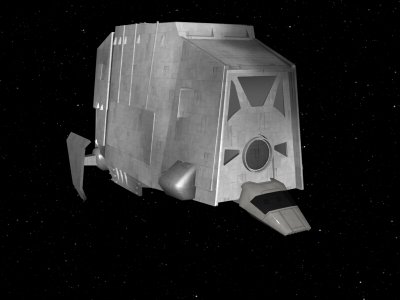 Description: The Sigma Class Transport is a long range cargo vessel serving a similar role for the Empire that standard Light Freighters serve for the Rebellion, carrying the cargo that keeps government in motion flowing around the galaxy. A much larger vessel than its Sentinel and Lambda cousins the Sigma is a dedicated cargo vessel, and while sharing some features with the smaller vessels in this line, the Sigma has few armaments and little shielding, although still manages to be remarkably fast and manueverable. The extended cargo hold can actually hold an upright AT-AT walker, although the loading doors on each side are not big enough for the AT-AT to enter fully upright requiring it to lower itself as it enters. However even given this handy feature, the Sigma class is rarely used for transporting troops or vehicles to battles, only for transporting supplies away from combat. Because of its underarmed non-combat nature, the Rebel Alliance has seen the Sigma as a easy target, and although never as common as the Lambda class shuttle, the requirements of the Empire have made this an often seen vessel across the galaxy.


Page designed in Notepad, logo`s done on Personal Paint on the Amiga.
Text completely by FreddyB. Image is by "Bob the Dinosaur", copyright resides with LucasFilm.
Any complaints, writs for copyright abuse, etc should be addressed to the Webmaster FreddyB.