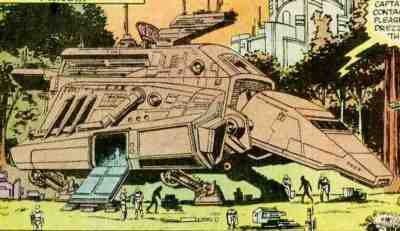 Description: The Xi Class Transport is a long range troop transport, capable of carrying a small taskforce of troops and light vehicles including a single Scout Walker and a number of Speeder Bikes or Land Speeders in operations far from Imperial Bases. These transports were mainly used during the early days of the Empire, when it was important for an Imperial presence to be felt on as many worlds as possible, however they continue to be used for special operations where a larger vessel or force is unavailable, unneccessary or undesirable. Their hull is mainly devoted to cargo and troop carrying space, although they also have powerful sensors and a long range communication system the only criticism of the design was their fairly small consumable supply for a vessel designed to operate for long periods without support, however the design was widely used by the Empire, and the increasing rarity of the design is only due to normal retirement of ships due to age.

Page designed in Notepad, logo`s done on Personal Paint on the Amiga.
Text completely by FreddyB. Image is from Marvel Comics Star Wars Series, copyright remains with Marvel Comics and Lucasfilm.
Any complaints, writs for copyright abuse, etc should be addressed to the Webmaster FreddyB.