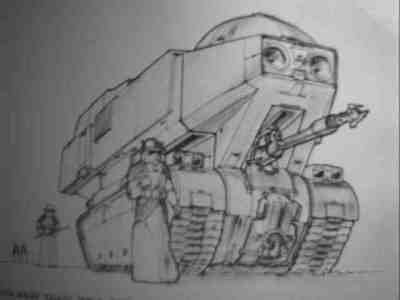 Description: Although the Republic made extensive use of high technology solutions to problems, such as using Repulsor Tanks as rapid combat vehicles, the Empire prefered the cheaper, more easily mass produced solutions neccessary for the quantity of vehicles they wanted in use. The Imperial Ground Tank is one of the early versions of this solution, and was developed to fill the gap before the AT-AT and AT-ST walkers were introduced. Although slower than the AT-XT and AT-TE walkers that predate it, it was far cheaper and therefore available in greater numbers. The IGT however never fulfilled the Imperial doctrine of striking terror into their enemies hearts, so was used only as a temporary solution until the newer walkers were completed. However the number produced, and the reliance on common parts has meant the AGT has lasted well, although only used on the fringes, it has been forced into use once more as supplies of walkers has dried up since the Battle of Endor, and while far inferior to almost any other battlefield vehicle, it is better than nothing.