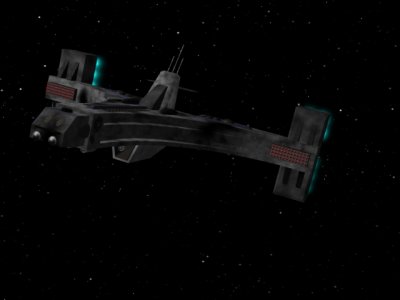 Description: The Imperial Missile Frigate is a small capital ship designed to operate as a capital ship destroyer in Imperial fleets. While small and agile enough to manuever close enough to launch some of its huge 384 missile capacity, it is still a powerful capital ship although many think it overly reliant on its missile batteries for offensive capability. The vessel is crammed to capacity with hardware, meaning that the inside is not as spacious as most other capital ships, this is demonstrated by the vessels lack of an internal docking bay for shuttles, relying on external airlocks for transferring personel between the Frigate and shuttles or other Imperial capital ships or stations. The 2 fighter capacity of the vessel was given to allow the ship some scouting capability, so that not only could it serve in this role in the Imperial fleet, but to give the ship a chance to turn to face any approaching enemy since the vessels weaponry is so front based. Imperial Missile Frigates has served the Empire for many years, and although they do not receive the recognition of Star Destroyers or Interdictor Cruisers, they are known by both Imperial and Alliance commanders to be vital to the continuing space superiority of the Imperial Navy.