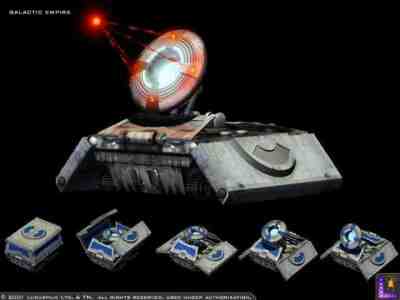 *: The Superlaser charges 2D damage every minute, and can only fire when charged to full power.


Description: As planets fell to one side or another during the Galactic Civil War, their planetary defence lasers and sheilds were often destroyed, leaving the victory with a world requiring protection until these installations could be rebuilt. This usually meant leaving capital ships stationed in orbit, tieing up these valuable vessels. The MPDSL was a solution to this problem, a powerful laser built into a mobile chassis, which could be deployed onto planets which had lost their own defence lasers, or put onto planets in danger of invasion as extra defence. The MPDSL could then deploy itself, and use its extremely powerful laser to engage starships in orbit. The Super Laser used in the MPDSL is a scaled down version of that in the Death Stars, and while a very powerful weapon capable of causing severe damage to even the largest capital ships, is not large or strong enough to destroy planets, and although the weapon can be turned against surface targets its minimum range means it has difficulty engaging any targets except installations.


Page designed in Notepad, logo`s done on Personal Paint on the Amiga.
Text completely by FreddyB. Image is by Lucasarts and copyright resides with them.
Any complaints, writs for copyright abuse, etc should be addressed to the Webmaster FreddyB.