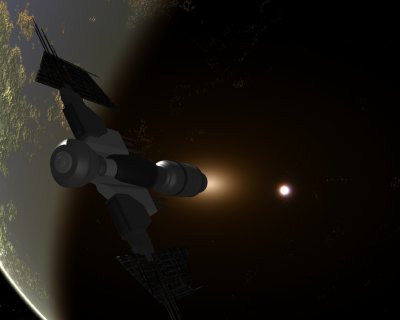 Description: The Warhammer Siege Cannon is an Imperial anti planet weapon similar but less powerful than the Death Star Battle Stations, armed with a powerful Plasma Siege Cannon the Warhammer can fire on target cities and bases wiping them out of existance with a single shot. The Plasma Charges fired are based around complex projectiles consisting of powerful energy matrices which are charged up by the vessel before firing, taking about ten minutes after the charge is loaded before it is ready to fire. Once released the charge converts into pure destructive plasma energy, however the plasma moves at a fairly slow speed compared to other energy weapons making it fairly easily dodged even by cumbersome capital ships, something which makes the weapon only really useful against non-mobile targets such as ground based installations and bases. The Siege Cannon is extremely slow, and not much use against shielded enemy worlds, but has found itself to be a vital tool for supressing rebellion on controlled worlds and for providing fire support to invading Imperial Forces once shields have been disabled. The Siege Cannon is even rarer than Imperial Torpedo Spheres, but is far more destructive than its more expensive counterpart and the perfect weapon for the Empire to continue its reign of terror through use of the Tarkin Doctrine. These vessels are poorly defended except for their main weapon, carrying no fighters and carrying few anti-starfighter and anti-capital ship weapons, with their main weapon taking up the majority of the frigate sized hull, therefore Warhammer Siege Cannons are rarely unaccompanied, with other Capital ships or even Star Destroyers acting as their protectors against the attacks which are always likely on a weapon of this power.