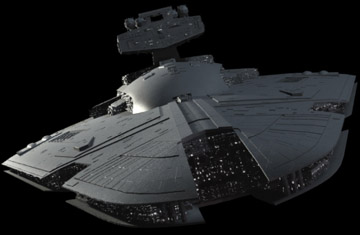 Description: Smaller but more common than the massive Imperial Star Destroyers, the Imperial Star Cruiser is a work horse of the Imperial fleet. The Chariot Star Cruiser is the latest generation of these vessels which were originally introduced shortly before the overthrow of the Old Republic, and are used to patrol and secure systems projecting the will of the Emperor to places which do not require the full might of a Star Destroyer. It is these vessels which protect shipping from pirates, and respond to the needs of the planets under the Empires control. They are powerful vessels, although not in the league of full blown destroyers and command ships, Star Cruisers perform a variety of tasks and older vessels are often found modified into cargo vessels, fighter carriers and other roles, although the uniform nature of the Imperial regime means that stock vessels are the most common of this type encountered. However variants such as the Immobiliser Class Interdictor Cruiser have also been built in large numbers, using the spaceframe of standard Star Cruisers with Gravity Well generators mounted into the hull at the expence of the vessels heavier weapons. Star Cruisers are good all round vessels, a feature which stops them being phased out in favour of the cheaper Nebulon and Lancer Frigates, and their similarity in design (right down to the parts used) to Star Destroyers also is a major plus in their favour with Imperial Commanders requirements to project a uniform presence across the galaxy.


Page designed in Notepad, logo`s done on Personal Paint on the Amiga.
Text completely by FreddyB. Image is by Chee hoe Wong, copyright resides with him.
Any complaints, writs for copyright abuse, etc should be addressed to the Webmaster FreddyB.