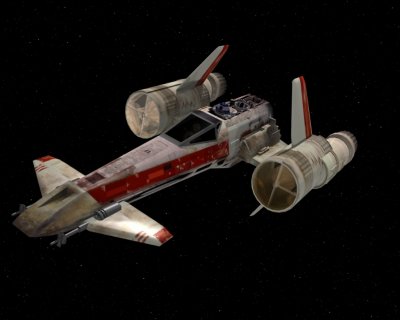 Description: With the extraordinary success of the X-Wing, the Rebel Alliance expected that its design team would be able to design many other fighters which would continue to give the Rebellion's squadrons space superiority against their Imperial counterparts. Along with many other fighters, they designed the Incom T-75 Hammerhead Interceptor, which used many of the X-Wing's parts in an attempt to keep costs down, and was conveniently similar to fly as the X-Wing fighter. The T-75 is far faster than the X-Wing, and for a short time it was the fastest fighter in the Rebel Fleet, until the A-Wing was introduced. The A-Wing actually saw the end of the T-75, since it was faster, more easy to control and could perform more successful strikes against Imperial shipping due to their targetting jammers. However the T-75 was used for a short time by some Rebel Squadrons until large enough numbers of A-Wing's became available, when the fighters were moved to reserve squadrons and groups allied to the Rebellion where they can still be found.