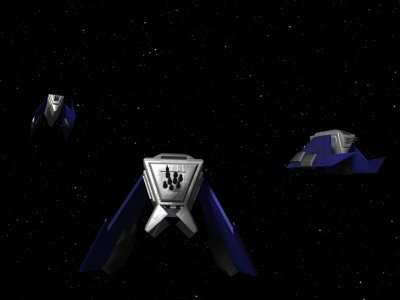 Description: The Insurrection Class Transport is a similar design of vessel to the Republic Acclamator Class Transport, offering slight improvements in some areas while suffering from a lack of weaponry and combat effectiveness. However the Insurrection is an older design, and its tougher hull and more extensive cargo and passenger facilities make it popular with civilian buyers. The Transport has massive cargo doors on the underside, allowing cargo modules to be easily loaded, or in a military role fighters, walkers and troops to be easily deployed once the vessel has landed upon its two massive skids on a planets surface. These vessels are still found serving with many mercenary and pirate groups, although most planetary forces have long since retired them, the retired vessels have been mainly sold onto the civilian transport market and these ships now ply their trade across the galaxy usually modified and armed to survive the more dangerous galactic situation that now exists.


Page designed in Notepad, logo`s done on Personal Paint on the Amiga.
Text completely by FreddyB. Image is by "Bob the Dinosaur", copyright resides with him and Rasori who designed the vessel originally.
Any complaints, writs for copyright abuse, etc should be addressed to the Webmaster FreddyB.