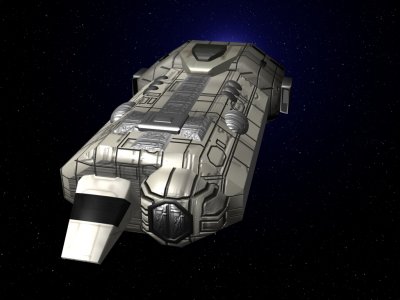 Description: The Iota Class Assault Transport is a replacement for the older Gamma Assault Shuttle, and although it is not as heavily armed as the older version, its faster drives and capabilty to carry 50 Space Troopers is much improved on the older model. The Iota has a forward mounted airlock for boarding actions, and retains the multiple airlocks to allow its complement of SpaceTroopers to exit almost simultaneously. With a more standardised design the Iota uses parts interchangably with the Lambda and Sentinel Class Shuttles, allowing it to be operated at a far lower cost than the old Gamma's, which has led to a large change for the Empire as they introduce this new vessel. However a number of officers have complained that the Iota is not as robust as the Gamma, and that its reduced combat effectiveness means that it will also achieve far fewer successes in the field, but so far these complaints have not been backed up by any significant proof, and have been put down to rumours spread by the Telgorn Corp who has lost the lucrative contract for building the Gamma Class Shuttle.