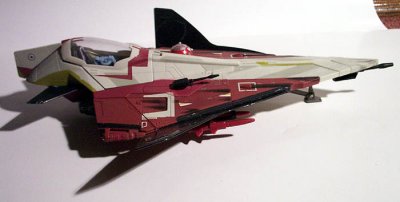 Description: The Delta-7/ae Aerosprite is a modfication of the standard Jedi Aethersprite starfighter, it was designed to enhance this already impressive (for its time) fighters capabilities within a planetary atmosphere. This was done because the Jedi Starfighter was being forced time after time into a support role, protecting the LAAT/i dropships as they landed and deployed their soldiers. While the Jedi Starfighter was already impressively performing this role, any enhancement which could save additional Clone Trooper lives before they even hit the battlefield was considered to be a massive aid to the Republics cause during the Clone Wars. The AeroSprite has extra aerodynamic surfaces to help its speed and manueverability within a planets atmosphere, as well as having concussion missiles added to its weapon load to help in dealing with enemy emplacements and starships landed on a planets surface. Finally the fighter had a turreted blaster cannon added to aid the fighter in dealing with small and manueverable airspeeders and other atmospheric craft. The Delta-7/ae was produced in smaller numbers than the standard Delta-7, this was in part due to the higher cost of this vessel, but also due to the continuing development of newer and better fighters consigning this fighter to the scrapheap before its production run had even began in earnest.