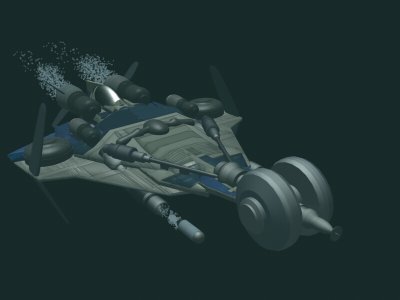 Description: The Delta-7 Aethersprite was a hugely successful starfighter, purchased mainly by the Jedi Order it was fast, manueverable and deadly in combat. As demands on the design increased when the Clone Wars began, Kuat Systems Engineering began a series of upgrades to allow the design to survive the more dangerous era that had begun, while the fighter was almost completely redesigned as it evolved towards the TIE series of fighters, and number of less well known designs were produced int he meantime. Some of these were direct upgrades like the Delta-20 Warsprite Fighter, but others were evolutions of concepts of the Delta-7. The Epsilon-3 Modular fighter evolves the concept of a modular design introduced by the Hyperspace ring used by the Delta-7, allowing fighters to be rapidly modified dependant on battle conditions. The Aquatic Module is designed to operate underwater and was designed in concert with Bulbabong using their expertise of underwater and oceanic equipment and conditions to modify the fighter into a fully submersible combat vehicle. With powerful Aquatic Concussion Torpedoes, and Blaster Cannons, the fighter is a danger vehicle especially compared to the more fragile standard submersibles, and its extremely powerful Gungan designed shield generator allows it to survive attacks both underwater and in space. However it is this generator and its placement which means that the fighter cannot use the standard hyperspace docking rings, and has a small, and fairly slow, hyperdrive of its own to compensate for this weakness in the design. The Epsilon-9 design sold in extremely low numbers due to its extremely specialised role, but these few modules have survived well through the years, and on water worlds these fighters are still made strong use of due to their dual role.