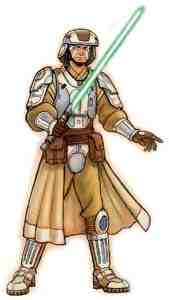 
During the Clone Wars Jedi fought side by side with the Clone Troopers, and for this reason armour was designed to help them survive the rigors of combat, and to offer them some of the advantages that were being given to the Clone Troopers. Offering similar plating on some parts of the body, the Jedi Armour was designed to avoid restricting the wearers movements as much as possible. The design was in some ways based on Ancient Jedi designs dating from the Sith War, but was designed to be mass produced in a short time as demand required at that time.
Model: Jedi Combat Armour
Type: Personal Combat Armour
Game effects:
Basic Suit:
+1D phys (Full Body)
+2D energy (Full Body)
-1 Dexterity

Description: Light combat armour designed for the Jedi Knights during the Clone Wars and based on older Jedi designs. Due to its designers also working on the Clone Trooper armour, the two types have features in common. The armour was only used for a short time, so is not commonly recognised as being Jedi Armour, but will be on Imperial records as being of that design.