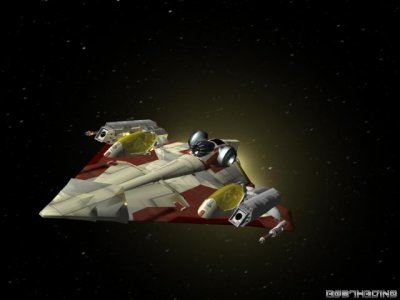 Description: As the Clone Wars continued the need for a bomber starfighter to match those of the confederation became clear, so design started at Kuat to create one for the Jedi and Republic forces to use. The AetherDaemon was the result, fulfilling the role that the Tie Bomber would later fill, with its two crew configuration and heavy missiles, the Delta-30 could easilyhandle itself in battle, and in some ways is better than its Tie replacement. However the fighter is expensive to produce, and its connection with the Jedi has meant that the Empire retired all of its AetherDaemons long ago, but some of these found their way onto the open market. Although the fighter is unpopular because of its Jedi connections, the vessel has made its own reputation as an older but still powerful combat fighter, and many still serve reliably across the galaxy.