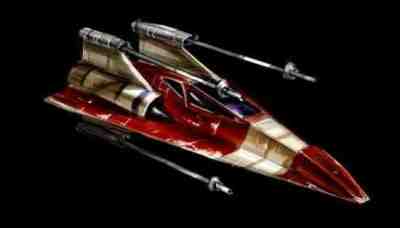 Description: As the Clone Wars continued the Jedi found themselves involved in far more battles than at any other time in their history, and found that the Starfighters they were using were out-numbered by Droid starfighters by such an overwhelming amount that even the incredible skills of the Jedi could not compensate. And while it took a long time to train more Jedi, they could however better equip the Jedi already trained, to give them a better chance of survival and victory. To this end the Delta-20 was introduced, using a number of the same systems as the Delta-9 Aethersprite, the Warsprite could use the same docking facilities and even the same hyperspace booster rings to give them hyperspace capabilities. But was better armed and more capable of carrying its pilot through skirmishes in one piece, the extra power demands of the uprated shield generator and more powerful weapons, combined with the new more heavily armoured engines, meant that the Delta-20 is somewhat slower than the Delta-9. The Warsprite shows a number of similarities to the X-Wing fighter which was to come a few years later, which is unsurprising since most of the design team was the same, leaving Kuat as it became more involved with the emerging Empire, just as they later defected to the Rebellion when Incom was nationalised.

Page designed in Notepad, logo`s done on Personal Paint on the Amiga.
Text completely by FreddyB. Image is from TheForce.net, Copyright resides with the artist.
Any complaints, writs for copyright abuse, etc should be addressed to the Webmaster FreddyB.