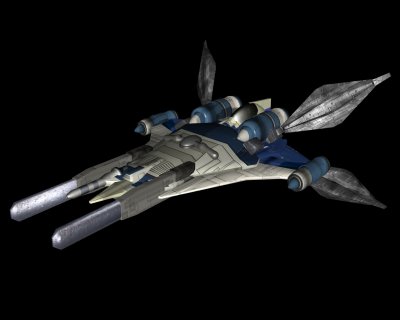 Description: The Delta-7 Aethersprite was a hugely successful starfighter, purchased mainly by the Jedi Order it was fast, manueverable and deadly in combat. As demands on the design increased when the Clone Wars began, Kuat Systems Engineering began a series of upgrades to allow the design to survive the more dangerous era that had begun, while the fighter was almost completely redesigned as it evolved towards the TIE series of fighters, and number of less well known designs were produced int he meantime. Some of these were direct upgrades like the Delta-20 Warsprite Fighter, but others were evolutions of concepts of the Delta-7. The Epsilon-3 Modular fighter evolves the concept of a modular design introduced by the Hyperspace ring used by the Delta-7, allowing fighters to be rapidly modified dependant on battle conditions. The Epsilon-7 module is a custom designed Interceptor module, with an intergrated hyperdrive and an extremely fast and manueverable drive system. To complete the fighters role as an interceptor the fighter has powerful laser cannons and an advanced sensor system, the sensor system is built into to sensor spikes on the front of the fighter extending its sensor range by a massive amount in the front quarter, and improving the accuracy and resolution of the sensors as well. This module is the cream of the designs, and if the modular fighter design had taken off, the Interceptor would have become extremely popular, however with the Epsilon-3 selling only small numbers the Interceptor module is rarely seen although greatly desired, which accounts for its high resale value.