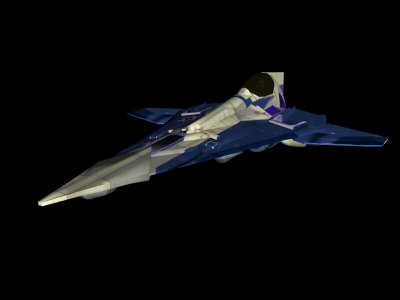 Description: The Delta-7 Aethersprite was a hugely successful starfighter, purchased mainly by the Jedi Order it was fast, manueverable and deadly in combat. As demands on the design increased when the Clone Wars began, Kuat Systems Engineering began a series of upgrades to allow the design to survive the more dangerous era that had begun, while the fighter was almost completely redesigned as it evolved towards the TIE series of fighters, and number of less well known designs were produced int he meantime. Some of these were direct upgrades like the Delta-20 Warsprite Fighter, but others were evolutions of concepts of the Delta-7. The Epsilon-3 Modular fighter evolves the concept of a modular design introduced by the Hyperspace ring used by the Delta-7, allowing fighters to be rapidly modified dependant on battle conditions. The base design is the Epsilon-3, which is somewhat lighter than the Delta-7 but includes the module clamps on the underside which allow the fighter to be upgraded with weapons or specialised equipment for mission specific roles. While expensive for what it is, the Epsilon-3 is required for the rest of the modules, and can be easily upgraded with the modules to match very nearly any starfighter available in the current day, making it an extremely powerful design. The Epsilon-3 Starfighter was produced in small numbers, but due to the expense it was never purchased for anything other than demonstration purposes by any governments, making it elusive and rare in the current days.