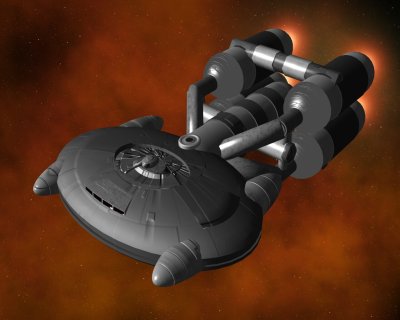 
Description: The Jermagium Class Freighter is a modular freighter designed to compete with the ever popular YT series of vessels, and is designed with plenty of port for addition cargo containers to be attached. Mainly two large (100 tonne) containers can be attached to either side, smaller (50 tonne) compartments can be added top and botton, and a massive (200 tonne) container towed behind the main body of the vessel. However the modular design allows it to act in a freighter in its own right without the modules being attached, and although it has never reached the popularity of the YT series, it has become fairly common especially with owners who like the ability to greatly upgrade their vessel without making large structural changes. The Jermagium has a backup hyperdrive and a good sublight speed, as well as being armed with a powerful laser turret, all of which make it popular with its captains and crew as a safe, reliable and fairly comfortable.


Page designed in Notepad, logo`s done on Personal Paint on the Amiga.
Stats by StarWarsClub.org, descriptive text by FreddyB. Image is by "Bob the Dinosaur", copyright resides with them.
Any complaints, writs for copyright abuse, etc should be addressed to the Webmaster FreddyB.