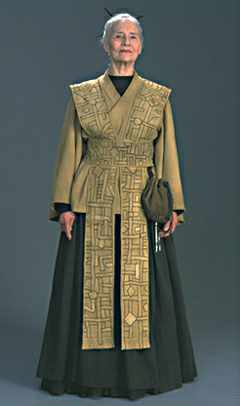 *: Attributes and Skills marked with a * have been adjusted due to age.

These are the known powers Jocasta Nu possessed and it is believed that she had access to other powers.


Jocasta Nu, was the Chief Librarian of the Jedi Archives at the time of the Clone Wars. She had a penchant for being a bit overconfident in the completeness of her Archives. Jocasta Nu served more than 10 years as a member of the Jedi Council. She wore her lightsaber at all times, indicating that at one time she had been an active field agent of the order. She only took up the mantle of Librarian after Jedi Master Tahl was killed, and likely after she had finished training her padawan, future Dark Jedi Jerec. Her patterned robes bore the symbols of the Ansata, representing her devotion to knowledge and learning. She was killed by Darth Vader when he invaded the Jedi Temple during the Great Jedi Purge. Vader stabbed Jocasta through the chest after she denied access to the Temple's signal beacon. Before this, she had rescued numerous Younglings, telling them to hide in the Council chambers. Eventually, Vader found the Younglings and slaughtered them.


Page designed in Notepad, logo`s done on Personal Paint on the Amiga.
Stats by K. Descriptive Text and Image is from Wikipedia, copyright remains with LucasFilm.
Any complaints, writs for copyright abuse, etc should be addressed to the Webmaster FreddyB.