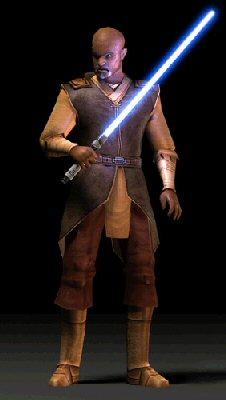 
An eccentric former smuggler and skilled Jedi, Jolee Bindo chose to retreat from society and live out his days in seclusion and obscurity, four thousand years before the Galactic Civil War. Bindo cloaked himself in indifference to hide his sorrow. He appeared as a cantankerous old man who readily dismissed the wide world and its troubles with an impatient wave of his hand, but his care and wisdom still shone through the many layers he had draped around his heart.

His story remains unknown aside from rumors that he fought in the great war of Exar Kun -- in a time when Jedi turned against Jedi and the dark side threatened to swallow the galaxy. It is not known what happened that pushed Jolee to leave the Jedi order, to leave civilization itself and go into self-imposed exile in the deepest shadows of wild Kashyyyk.

Jolee remained tight-lipped and scoffed at any suggestion that he might be something more than what he appears: an old man. But his skills were apparent, and when Bastila Shan's mission to uncover the Star Forge caused Republic agents to cross paths with Jolee in the Kashyyyk shadowlands, he was willing to finally return to the galaxy at large. Jolee accompanied the quest for Darth Malak, traveling to distant worlds such as Manaan, where he uncovered elements of his forgotten past -- like his friend and fellow war hero Sunry, who was held captive for murder on the watery world.

Despite a series of rousing adventures among spirited youngsters, Jolee remained weary of the galaxy's endless, pointless struggles. He insisted that all he wanted was peace, but his eyes -- the eyes of a fighter, the eyes of a Jedi -- told a different story.