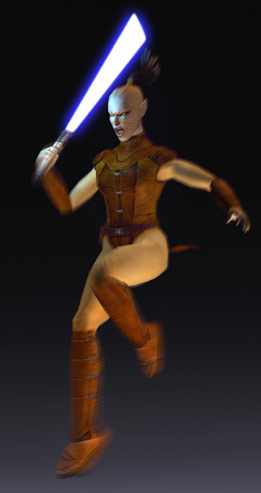 SPECIAL ABILITIES
Claws: Cathar are a feline species with retractable claws which extend in anger, these claws do Str+1D damage when used in combat.


Juhani, a Jedi Guardian of four thousand years ago, lived much of her life trying to quiet the conflict within. Like most Cathar who chose to join the Jedi Order, she was locked in a never-ending struggle to find a balance between her instincts and her training.

The feline Cathar species is known throughout the galaxy for their courage in battle, and for their fierce loyalty and their quick tempers. Such intense passions can make it difficult for one of this proud species to follow the way of the light.

Juhani devoted herself fully to the Jedi, determined to master both her volatile emotions and her ability in the Force. She strove to be a paragon of the Order; she swore to live her life completely by the Jedi Code. Because of this, she did not easily accept failure in herself or in others.

Such intensity worked against her, unfortunately. Her master, Quatra, underestimated Juhani's ferocious instincts. At the Jedi training compound on Dantooine, Juhani lashed out against her instructor and accidentally killed her. Shocked at what she had done, Juhani became a recluse, living in a secluded grove in the Dantooine plains.

Her despair created a disturbance in the Force, agitating nearby animals and casting a gloomy pall on that area of the Dantooine grasslands. A Jedi initiate found Juhani there, but the Cathar was at first not yet ready to come out from seclusion. She was still grappling with her own demanding standards.