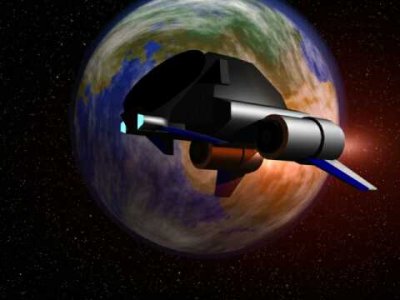 Description: The Intersterce Jump Ship is a small vessel for intra system travel, and with fairly fast ion engines, and a small hyperdrive it is ideal for this task. The hyperdrive is too weak, and its life support too short for travel between star systems, but as a short range two man transport the Intersterce is perfect. Originally built for those who could afford not to use public transport, but didn't want to pay for a true starship, this jump craft is well appointed and comfortable inside. However the Intersterce has also found use as an inspection craft and even limited use as a starfighter, its low price making it suitable for engineers and designers to examine their latest orbital project, and its twin laser cannons packing quite a punch for such small weapons. The Intersterce sold reasonably but not spectacularly well, and its production was ended several years ago in favour of more heavily armed starfighters and more expensive yaghts.