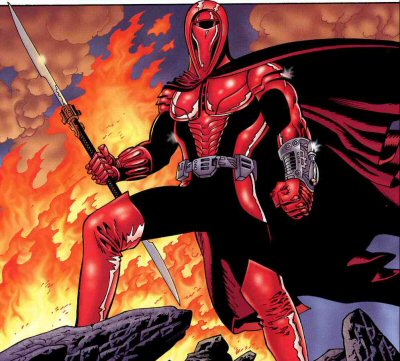 
A stalwart adherent to the tenets of the New Order even long after the Empire had collapsed; Kir Kanos' beliefs made him one of the most deadly fugitives in the galaxy. Kanos was a member of the Emperor's Royal Guards, the elite red-robed sentinels that guarded the galaxy's ruler.

The best of his class at secret training grounds on Yinchorr, Kanos was an expert at the echani fighting form and in wielding a force pike. Kanos' fanatical loyalty, though, was his greatest and most dangerous weapon. Even after Palpatine was defeated at Endor, Kanos and his fellow Royal Guardsmen remained true to the Imperial ideal. As Imperial moffs and admirals began greedily carving up the Empire to fuel their own ambitions, Kanos attempted to uphold the codes of the New Order.

Years later Palpatine returned in the form of a clone imbued with dark side energies, and the Royal Guardsmen flocked to his side with renewed purpose. This return was not to last, as Palpatine finally succumbed to death on Onderon. In an unthinkable display of treachery, it was a Royal Guardsman who was partially responsible for his demise.

The treacherous Carnor Jax had betrayed his oaths and sabotaged Palpatine's clones. As the remaining Royal Guards gathered on Yinchorri to mourn the loss of their Emperor, Jax unleashed his stormtrooper forces. All but one Guardsman was murdered: Kir Kanos.

Bereft of purpose, Kanos turned to vengeance. He was sickened by the self-styled Imperials who were but usurpers to the forgotten ideals of Palpatine. Kanos targeted Jax, killing the traitor, but he became the enemy of the entire Imperial Interim Council.

To better operate in the fringes of the galaxy, Kir Kanos adopted the name Kenix Kil, and posed as a bounty hunter. With this alias, he was better able to hide from the hunters pursuing him. Kanos succeeded in killing would-be Emperor Xandel Carivus.

Kanos' current whereabouts are not known.