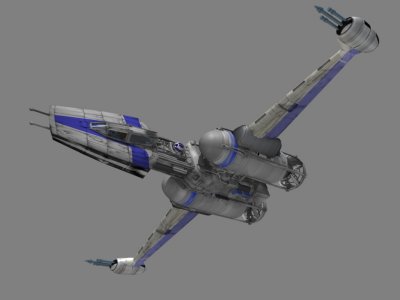 Description: By the Battle of Endor and the fall of Emperor Palpatine the venerable Y-Wing Starfighter, which had so long served the Rebel Alliance, was being phased out in favour of newer and better armed vessels such as the B-Wing. Koensayr keen to keep the reputation they had built on the back of Rebel successes decided to rush into design and production a starfighter which would act as a replacement for the Y-Wing and keep their fighters flying for the Rebellion. The I-Wing is the design concieved, a starfighter which uses many of the same parts as the Y-Wing, and which has a similar design to the Verpine B-Wing, which however does not have any of the vulnerable systems which make the B-Wing such a nightmare to maintain. The I-Wing is a heavy starfighter with quad laser and ion cannons providing the fighter with a heavier punch than the B or Y Wings, as well as providing a large ammunition cache for the proton torpedo launcher and a larger supply of consumables which allow the fighter to operate for longer between resupplying stops. The wings fold to the sides to allow landing, although require a larger space than the original Y-Wing but not much more deck space than the B-Wing needs. I-Wings were never adopted by the Rebellion or New Republic because by the time the fighter was put into production the B-Wing had almost completely replaced the Y-Wing, and there was no immediate need for a new fighter, however the design sold well on the open market and a number of independant squadrons have put the design to good use and the vessel has proven itself as a tough, powerful and reliable starfighter.