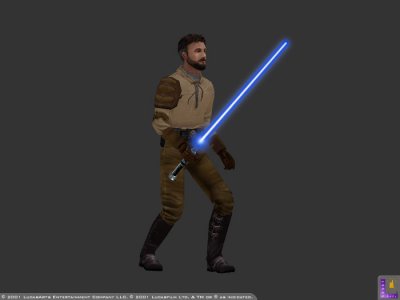 EQUIPMENT
CREDITS - 1,500
Lightsaber (5D), Bryar Blaster Pistol 4D (also known to use whatever weapons he can lay his hands on).
Personal Force Shield (Absorbs 15D of damage which is allocated as needed, however loses one pip every round it is active.)
"Moldy Crow" Transport Vessel, and later "The Ravens Claw" Transport Vessel.


Kyle Katarn was an elite Rebel agent entrusted with some of the most crucial missions of the Rebel Alliance. It was Katarn that single-handedly infiltrated an Imperial installation on Danuta, securing the technical plans of the Empire's Death Star battle station.

A former Imperial, Katarn was born on the Sullustan colony moon of Sulon, living a simple existence as a farmer with his father Morgan. Unaware of his father's Rebel sympathies, Kyle joined the Imperial Academy at Carida. He was indoctrinated and became a decorated Imperial trooper.

While in the Academy, Kyle's father was killed. Official records indicated that the elder Katarn had been murdered by Rebel dissidents. Kyle learned the truth, however, from a Rebel agent named Jan Ors. His father was killed by the Empire for treason. Disgusted with the institution he had joined, Kyle discarded his badges and merits, and cast away his Imperial trappings. He resolved to join the Rebellion.

Kyle became a highly capable and recommended Rebel agent, vouched for by the respected Jan Ors. Kyle drew the attention of no less than Mon Mothma, leader of the Alliance. She entrusted Katarn with that fateful mission to Danuta, and after the Battle of Yavin, Katarn was instrumental in quelling the threat of the Imperial dark trooper project.

Returning to Sulon, Kyle learned that his father had been aiding a refugee effort on the barren world of Ruusan. Morgan had discovered ancient ruins on Ruusan pointing the way to the Valley of the Jedi, the fabled battleground between the ancient Jedi and Sith. The Valley represented a great focal point of energy that if exploited could turn the tide in the perpetual battle between light and dark. Kyle knew that the location of the Valley should never fall into Imperial hands.

Others were already on the path to discovering the Valley, however. The Dark Jedi Jerec and his six henchmen, Gorc, Pic, Maw, Sariss, Boc and Yun, were determined to seize the nexus of power. One by one, Katarn defeated them, though in his aggressive strikes, he came dangerously close to succumbing to the dark side of the Force.

Long used to operating independently, Katarn at first refused Luke Skywalker's offer to become a Jedi apprentice. Instead, he continued to serve the Alliance, now the New Republic, on many important missions. After a troubling run-in with the dark side on the forgotten Sith world of Dromund Kaas, Katarn conceded that he would benefit from Skywalker's tutelage, and joined the Jedi Master's fledgling Jedi academy.

Kyle is human male with rugged good looks and an athletic build. He brandishes a green-bladed lightsaber, though he has been known to have access to a veritable arsenal of personal weaponry. He often travels with Jan Ors aboard the battered starship, the Moldy Crow.


Page designed in Notepad, logo`s done on Personal Paint on the Amiga.
Text from StarWars.com, Stats by FreddyB. Image is by LucasArts, copyright remains with them.
Any complaints, writs for copyright abuse, etc should be addressed to the Webmaster FreddyB.