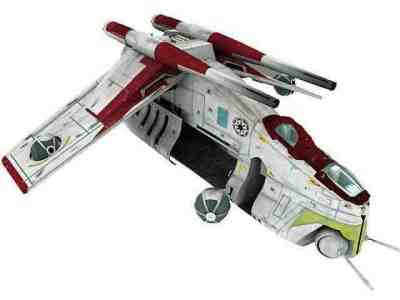 Description: The LAAT/i is the main infantry gunship and troop transporter used by the Republic during the Clone Wars. Featuring chin mounted laser cannon turrets for use against enemy personel, two dorsal mounted mass driver missile launchers make the vehicles main armament, while two automated laser turrets are built into the wings, and two manned turrets are mounted on articulated arms connected to the main cabin, and the vehicles armament is rounded out by air-to-air rockets slung on the ventral surface of each wing. LAAT/i remain expensive vehicles, but their extreme level of armament means that they remain popular with those that can get their hands on them.


Page designed in Notepad, logo`s done on Personal Paint on the Amiga.
Text completely by FreddyB. Image is from TheForce.net, and copyright resides with Lucasfilm.
Any complaints, writs for copyright abuse, etc should be addressed to the Webmaster FreddyB.