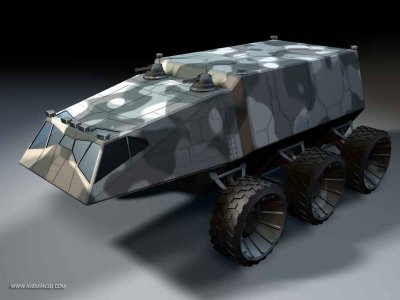 Description: The Land Barge was release shortly before the beginning of the Clone Wars, designed to complement the ageing Juggernaut armoured land cruisers that had served the military across the galaxy for decades. The Land Barge was designed to serve pretty much the same purpose, carrying troops and cargo on the battlefield, while acting as armoured support to infantry. Carrying much the same weaponry as the Juggernaut, but deployed as two independantly operated turrets, the Land Barge could either concentrate its firepower or deal with multiple targets, making the vehicle far more flexible. The Land Barge was a great success, but however was phased out of production quickly to make room for the manufacture of walkers which fitted far better with the emerging Galactic Empires doctrine of terror.


Page designed in Notepad, logo`s done on Personal Paint on the Amiga.
Text completely by FreddyB. Image is by www.axeman3d.com, copyright resides with the artist.
Any complaints, writs for copyright abuse, etc should be addressed to the Webmaster FreddyB.