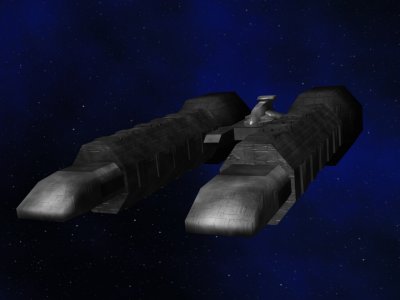 Description: The Legacy Class Bulk Freighter is the main method of shipping cargo around the Mandalorian Empire, and as such serves not only as a way of transporting goods and luxuries but also of transporting troops, weapons and military cargoes as well. The Legacy is an older design, but its military applications mean that it is tough, fast and well armed, and in some ways is a match for Imperial and Republic combat vessels. With fighter launch bays as well as its own weaponry, the Legacy is a capable vessel and these ships have some rare but notable military victories to their name. Although commanders of Legacy's think of themselves as being in quiet and unglorious jobs, they are a vital part of the Mandalorian Empire, and for their weakness and underarmed state, these vessels take part in some of the most dangerous missions available, dropping off vehicles and supplies to ground based campaigns, as well as providing important supplies for fleet actions. If converted to a straight troop transport role the Legacy can carry a million troops, but more commonly they serve in a mixed role, carrying thousands of troops as well as walkers, speeders, tanks and starfighters, meaning the arrival of a single Legacy can swing the fortunes of a ground battle, and making the transport vessel a prime target for enemy attacks before it can deliver its cargo.